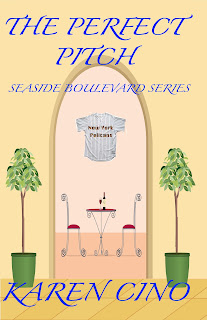 
Francine and Richie Ragglio are high school sweethearts. Francine owns her own real estate business and Richie pitches for the New York Pelicans. Richie hurts his shoulder while pitching the first game of the season, not the way he wants to end his career. When Francine is left an abandoned restaurant from someone from her past, things begin to spiral out of control. The mystery of a hidden basement brings Francine and her friends together to do their own investigation, which puts them in the middle of a smuggling ring. Will Richie's get through his surgery so he can retire on top of his game? And will Francine and her friends solve the mystery of the hidden basement?


Richie Raggalio’s name was called over the PA system. Everyone jumped to their feet clapping, and Francine’s butterflies hatched in her stomach with excitement for her husband. Richie came running out of the dugout, tipping his hat as he waved to the crowd. The press photographers called out to him. He stopped to let them take some pictures. Before going out to the mound, he walked up to the stands to give Francine a peck on her lips.
“This game is for you.”
Francine continued clapping and cheering with the crowd along with her friend Amy Mills. Fifteen years earlier, Richie took the same walk out to the mound, except his words to her had been, “Wish me luck” before taking his position on the pitching rubber. Today he stood on the mound, still tall and lean. The only difference being these days, he sported a crew cut.
Her life as a baseball wife, while running her own business, had been far from glamorous. Her foster parents had purchased the business for her after Francine caught them cheating on one another. Their deceit resulted in them paying for her college education, and giving her anything she wanted within reason, in exchange for keeping their secret. Her loyalty to both led her to becoming an entrepreneur.
“Let’s all stand to sing the National Anthem, being sung by local musician, Mike Gio,” the broadcaster announced.
Francine kept her eyes on Richie. When she sat next to him in biology lab twenty-five years ago, her heart had skipped a beat. The first time she watched him pitching in high school, she had no idea she would become part of his baseball career.
Richie had spent his whole career playing for the New York Pelicans. Most games she attended alone, leaving her two childhood best friends Amy Mills and Toni Belluci to run things at the office. Looking around at the other players’ girlfriends and wives sitting in the area, she couldn’t help but laugh to herself. The younger the women were, the higher the stilettos and shorter the skirts. Francine never fit in with them. When she wasn’t at work, she pulled her long chestnut colored hair in a ponytail, wore jeans and, depending on the weather, flip-flops or flats. Today, she wore flats.
The fans began cheering during the final words of the National Anthem. Since this was Richie’s last season, she would cherish the moments spent at the ballpark. This had become her home, her way of living. The only thing that worried her was what Richie would do with his free time. He was drafted during his third year of college and spent the next few years working his way up through the minor-league organization. Since he was a teen, he had devoted his whole life to his baseball career and her. During the off-season, Richie volunteered at the high school helping pitchers, which occupied most of the winter months. Other than that, he didn’t have many other interests that would keep him from driving her crazy in retirement.