I'd like to thank everyone who stops by my little corner on the web to read my Tuesday Tales. I am thrilled to see everyone coming back each week to read my story about Billy and Alexandra. Their journey will continue next week.

This week, the moment I saw the picture prompt, I knew exactly what I was going to do. I wanted to give you a background of the hero, Drake Dente from my debut novel Roses. This scene, isn't in the book. 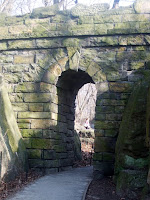 Drake leaned against the wall in the arched stone walkway. Living across the street from Central Park had always been one of his dreams since he was a young lad growing up in Liverpool, London. Those were the days when his family lived in a one bedroom flat, stone broke, sharing a hamburger and a dream.

In the beginning he was reluctant to leave. Just the thought of leaving his lads behind and going to a new country where he would stand out in the crowd with his heavy British accent scared him half to death.

He did stand out in the crowd and wasn’t included much in any of the activities his classmates were involved with. But getting stuck in a boring music class got him thinking. That night, he went home and wrote some random words, then began tapping his pencil against the kitchen table.

The next day, when he went back to school, he picked up an acrostic guitar and started singing. While sitting under a tree playing, a lad asked him if he’d like to join their band. They had a drummer and a bass player. He accepted and while playing in a dirty, dingy club, the band was approached by a major record label. Within a few days, they were signed and shoot straight to the top, taking their first single to number 1 on the Billboard Chart.

Drake touch the cement block where: I love Drake Dente, was written. Fame. How sweet it is. But never did he imagine, when his family moved here when he was fifteen, that he would be a rock icon living in a Manhattan penthouse with Nikki, the love of his life and their three children.

Now how he met Nikki, well that’s a whole other story.

After the untimely death of her husband in the line of duty, Nikki Petrino still grieving three years later, goes on retreat to Mexico to finish her novel, where she meets musician Drake Dente a 90’s rock icon working on lyrics for his comeback CD.

After meeting at dinner, Drake and Nikki can’t keep their eyes off each other. Sparks fly and they instantly became an item. Upon returning to New York for Nikki’s high school reunion, she learns shocking events from her best friends.

After a misunderstanding, Nikki is missing and Drake is desperate to track her down.


Roses is available at: