Welcome to this weeks Tuesday Tales.  This week I'll be writing to the picture prompt below.  I hope you are enjoying Pia and Lorenzo's Story. 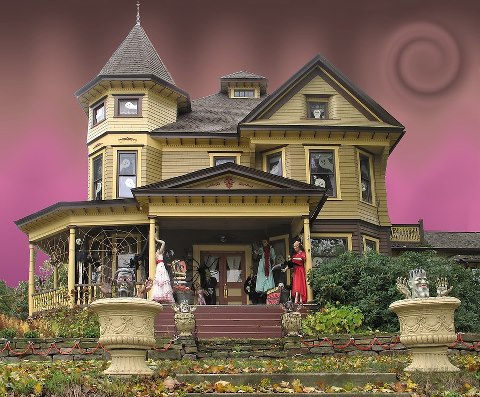 On the way back to Staten Island, instead of using the highway, Lorenzo drove through the streets.  This took Pia by surprise.  Why was Lorenzo purposely taking the long way home where they had to stop at every corner because the lights weren’t in sync?

Lorenzo reached over and pinched her cheek.  “I know what you’re thinking.”

“And what’s that?” she played along with him.

“I want to show you this house.  It’s in the middle of Bensonhurst.”

“What so special about it?”

“As a kid I called it the mystery house.”

“The house was so big, unlike the ones around it.  The Fishers were the owners.  They are eccentric and still to this day leave their house decorated for Halloween all year long.”

Lorenzo pulled up in front of the house.  She would have never believed him if she didn’t see it with her own eyes.  The house was a replica of the doll house her father had made for her when she was eight, and she had stored in her attic.

“See the hexagon tower,” Lorenzo pointed across her, “as a little boy, I would imagine myself sitting up there with all my baseball pictures and trophies surrounding me. This was the house I eventually wanted to settle into and start a family.”

Pia gazed at him and rested her hand over his on the steering wheel.  “You’re halfway there.  You have your dream career.”

“Yes I do.”  Lorenzo leaned over, swept her hair off her face with the back of his hand, turning her face until their eyes met.  “And I think I have found my dream girl.”