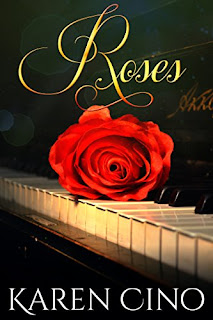 BLURB
After the untimely death of her husband in the line of duty, Nikki Petrino still grieving three years later, goes on retreat to Mexico to finish her novel, where she meets musician Drake Dente a 90’s rock icon working on lyrics for his comeback CD.
After meeting at dinner, Drake and Nikki can’t keep their eyes off each other. Sparks fly and they instantly became an item. Upon returning to New York for Nikki’s high school reunion, she learns shocking events from her best friends.
After a misunderstanding, Nikki is missing and Drake is desperate to find her.
EXCERPT


She dangled a pair of white heels from her hand, but glancing at her sunburned feet she decided on a pair of white flat sandals instead. She closed her hotel room door and headed to the Bamboo Bar.
The waiter led her to the perfect table beneath a bamboo roof with an ocean view. Before opening the newspaper she purchased earlier in the hotel’s gift shop, she ordered a piña colada. She was quite surprised to see a New York paper. However, when she realized it was two days old, it brought a smile to her lips.
Nikki still found it hard to believe that she’d actually picked up and left solo. She always liked to be around people and would rather not eat than to be caught alone in a restaurant. But tonight she cherished her privacy. She loved the fact that she could do whatever she wanted when she wanted. Whenever she went anywhere with her friends, their main concern was always when and what they were going to eat and what time they were going to get home. Now, there were no responsibilities, no time schedules and no one lurking over her shoulder giving her what they thought was the perfect solution for her broken heart. Yes! This was the perfect trip for her.
Just as she finished her drink, the waiter brought her another cocktail. She shook her head no and continued reading the paper. To her dismay, he left the drink on the table and walked away. Before she could call after him, he was already across the room waiting on another table.
"Excuse me, miss." The interruption came from a tall muscular man built like a body builder with the word Mom tattooed on his upper arm.
"Yes?"

"The drink is from the gentleman sitting over there," he said, pointing to a well-dressed man wearing black tailored pants and a white button-down shirt.
"Please tell him, no thank you."
Nikki waved him off. She wanted no part of the man standing in front of her. He was so big and his voice so deep that he frightened her.
“Please miss, the gentleman would like very much for you to accept his offer,” he firmly explained in a distinct New York accent.
"Listen, I don't care who it's from. I'm just not interested," she muttered, hastily standing up.
"Hey that's all right, Tony. I'll take it from here. I'm a big boy now."
Nikki turned around and there standing in front of her, stood a distinguished man. He seemed familiar. He was tall, beardless with a fair complexion, highlighted by very appealing hazel eyes. His wavy light brown hair extended past the nape of his neck and lay floppily on his forehead. She fought the urge to sweep his shiny bangs away from his soft brown eyes.
“I'm Drake Dente," he said in a British accent.
As soon as he spoke and introduced himself, she knew exactly who he was. "Nice to meet you, Drake. I'm Nikki Petrino."
"Oh, really!" Surprisingly, he laughed. "I just finished reading your novel Detective’s Row. It was great. In fact it was the first book in a long time that kept my attention from beginning to end. Damn, I wish I had brought it with me. I would’ve loved to have you autograph it!"
"Thank you." She smiled. “That's truly a compliment."
"You wrote it like a true New Yorker."

AVAILABLE THROUGH SMASHWORDS
Posted by Karen Cino at Monday, June 19, 2017