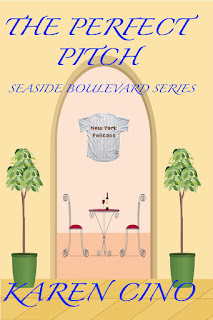 The Perfect Pitch is book 1 in the Seaside Boulevard Series.
$3.99 on Amazon Kindle & $12.99 Paperback
BLURB

Francine and Richie Ragglio are high school sweethearts. Francine owns her own real estate business and Richie pitches for the New York Pelicans. Richie hurts his shoulder while pitching the first game of the season, not the way he wants to end his career. When Francine is left an abandoned restaurant from someone from her past, things begin to spiral out of control. The mystery of a hidden basement brings Francine and her friends together to do their own investigation, which puts them in the middle of a smuggling ring.
Will Richie's get through his surgery so he can retire on top of his game? And will Francine and her friends solve the mystery of the hidden basement?
EXCERPT

Francine went along with the laugh. No way would she try to explain to them what they were up to. As far as Francine was concerned, they were just appeasing Toni. If the basement had been closed, then there would have been another blueprint in the book. Or maybe Marvin closed it up and never bothered to change the blueprints, so he didn’t have to hire an architect and file permits. He might have said screw it in order to save money.


Francine walked out the backdoor and there was Amy along with Toni on their hands and knees, pushing grass with their hands off the concrete.


“Well if it isn’t the Nancy Drew dream team.” Francine laughed, resting her hands on her hips.


“I’m going to help you. But I think before we go crazy, we take another trip down to City Hall to see if there is another blueprint beside the two of them.”


“Okay, I believe you,” Francine said. “I didn’t mean to agitate you.”


“I think the opening has to be over here somewhere,” Amy said, pointing to the metal tape measure. “I’ve followed the dimensions on the blueprint to a ‘T.’ If I calculated right, the opening should be right around here.”


Francine dropped to her knees. She joined Amy and Toni in pulling the overgrown weeds and grass off the back of the building, exposing the concrete foundation.


“We’re going to have to dig some of the dirt away from the building,” Amy concluded.


“I think we should take another look at this.” Francine stood, shaking her right leg that had become stiff. “I’m going to grab the shovels. Using my hands isn’t cutting it.”


“I agree with her.” Amy stood. “I’m thinking something is here. A basement just doesn’t disappear.”


Francine handed Amy and Toni a shovel. Immediately, Francine and Amy began, while Toni tapped her shovel around the area. As she shoveled, Francine kept her eyes on Toni who seemed to be on a mission of her own.


“What’s she up to?” Francine asked, nudging Amy.


“I’m going to keep digging.” After digging a foot down and six feet wide, Francine finally was able to see the difference in the concrete. The smooth concrete had turned into unleveled bricks held together sloppily by cement.


“Hey, I found something here,” Francine called out.


Francine leaned her shovel against the side of the building. “What did you find?” she asked walking with Amy toward her.


“I’m not sure if it’s anything. But listen.” Toni banged the shovel two feet behind her to the dirt and then three feet in front of her. “I hear an echo. Do you?”


Toni tapped her shovel again in front of her and behind her. The sound was different. But how could it be? Francine thought.


All three women started digging. After a few minutes, they hit something hard. They dropped to their knees and used their hands to move the dirt, to reveal a metal plate with a big thick round metal handle.


“I knew there was something fishy about those blueprints,” Toni gloated.


“What should we do now?” Amy asked standing.


“Open it, see what is under the door,” Francine said.