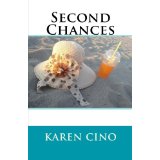 Second Chances is Book 2 in the Mystical Wonders Series
Available for $2.99 Amazon Kindle and $10 Paperback

BLURB
Madison, Shari and Cassie play a major role in protecting Fay, while digging into Angelo’s past. Shari still can’t channel into Angelo’s mind, leading the women to believe he has something to hide. A reunion with an old love puts Madison’s relationship with Sal to the test, causing her to reevaluate her life. While family secrets continue to be exposed, Cassie’s life spirals out of control. Both women will be forced to make life changing decisions. Having gained Fay’s trust, Angelo is ready to move forward with his plan no matter what the consequences. Cassie seeks Shari’s help on a case. While they uncover pieces of the puzzle, they get closer to the truth about Angelo’s past. Madison, Shari and Cassie come together, racing against time, to save Fay from a disastrous fate. Four friends, four lives intertwined together, setting the stage for second chances.
EXCERPT


Angelo pulled his truck into a narrow driveway and parked around the back of an abandoned building. He rushed through his route to have extra time to spend with Tina, who hadn’t arrived yet.
The past few months had been pure hell on him. This game had turned boring. The worst part was that he had to pacify both Fay and Tina now. They would do anything he asked. He had both of them at his disposal. Sometimes it was sick how they ran around for him. But with them surrounding him, he felt like the king of his castle. He could do no wrong in their eyes. They jumped to his every command.
“Ha! Angelo my boy, you still have all the charm and physique,” he said into his rearview mirror. “You treat them like whores, wine and dine them once in a while and they’re eating out of your hand.” Angelo chuckled.
Fay and Tina were the easiest of all. They both fell hard for him. He patted his crotch. “Johnson my man, God blessed me with the biggest pecker of all. Man, were they right in saying women cared more about the size than the quality. The bigger the pecker, the better the penetration.” Angelo laughed hysterically. This was so cool. He would never again work a single day in his life when he finished with all of them. They were stupid broads, with Tina being the biggest slut of them. As long as he gave her sex once a week, she left him alone. Now with her at Fay’s shop, he would have total access to Fay’s financial situation before he took action.


He’d been searching for something he just couldn’t find. Every time Fay left the house, he would riffle through all her things looking for something, anything which would give him the bigger picture of her finances.


The last time Fay and Heather went on one of their mother-daughter adventures, he combed every drawer in her bedroom. He pulled them out in hope that maybe she taped a key or envelope under the drawer, each time coming up empty. Every time she went out, he took another room. He even went as far and checking inside all three toilets in the house, to no avail.


Why did she have a separate account for the business? He couldn’t understand that. Fay insisted she didn’t want to mix their personal and business accounts together because this made paying the quarterly taxes easier. What he didn’t like was those bank statements went directly to her computer so he had no access to them. He just had a feeling she was hiding something. And he’d be damned if he didn’t find out if his suspicions were true or false.


It was a shame his ex-wife died for no reason at all. He wasn’t smart back then. He should have searched harder for her will when she was by her whore sister’s house with her sick kid. If he would have known she left all her money to her sister for medical expenses, he would have just left her and started over. Instead, he had to cover up a murder, which he did perfectly. Damn accidents did happen.